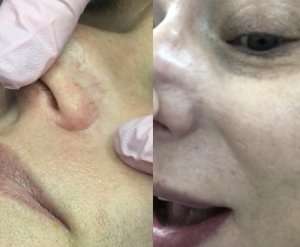 Before and After KTP Treatment

In my initial consultation, I was told I have red veins. This is not news to me! I have had them for well over 10, if not 15 years. Basically, I have visible red veins on my nose. They are tiny wiry looking veins on the side of each nostril. They are broken capillaries, and in my case there were prominent looking ones along with smaller more faded ones. Altogether, like a little road map of my life!

They aren’t painful but they are visible and I notice them. I saw them in photos and videos and last week, and my daughter told me the side of my nose was a bit like Google Maps! I have tried to cover them up, but the problem with the nose is that if make up is going to wipe off somewhere first, it will be the nose! I have patches of dry skin around the area also and so it’s a difficult section of skin to hide blemishes. Generally speaking, the reason I have these veins is mostly down to genetic factors, but cold weather, diet and age probably all contribute to the problem. Wearing glasses can exacerbate them also. I was told in my initial consultation that these could be removed and it was a delight to hear! I was told that they could be lasered quickly and the process was simple and would alleviate the redness I know is visible. So all things considered, it was time to have them treated!
˚
The first thing to note is that I needed to have a patch test. This is to make sure I didn’t have any reactions to the laser. KTP is a laser pen. The laser has a fine point on it and it targets directly to the vein. In order to make sure it doesn’t react, a patch test is absolutely required and treatment can happen 24 hours later if there’s no reaction. The patch test was on the side of my face and I had no issue with it. So, all systems go!
˚
My veins, as you will see on the video on Instagram, are on my nose. They can be almost anywhere, but the nose is an area they love to bed down in and other areas like the cheeks are prone to them.  I have much smaller ones on my cheeks which can be treated separately, but the nose needed the specific green KTP laser. The laser targets red shallow blood vessels. These are gently heated to stimulate a repair process. Some disappear immediately, but some take a few weeks to fade. Occasionally, a second treatment may be needed.
˚
I was prepared to have this problem tackled and looking forward to results. After my makeup was removed, my eyes were protected with cotton pads and goggles. My therapist, Deirdre, then got to work on the red veins using the KTP Laser pen. She told me she runs the laser up and down the vein. This felt strange but not sore. It’s a sharp feeling; the area around my nose is certainly more sensitive than I thought so it tingled! It’s a bit like a rubber band being snapped on the skin.
˚

But the joyous thing is that is wasn’t long. I had 2 or 3 visible red veins on either side and within minutes, they were gone! 15 years of concealers and full coverage and not turning my head to the side in photos were all evaporated in seconds. 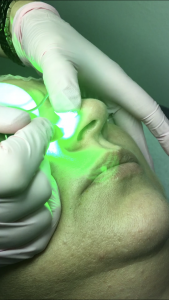 Sinead getting the KTP Treatment

I know I probably made excuses, and didn’t come to get them sorted out, but honestly, I was feeling too self-conscious about them. I couldn’t believe how the process is so easy and ultimately so quick to get seen to!

There is something so powerful about being able to rise up past the little imperfections that annoy you and having them taken care of.

˚
Following the treatment, my therapist applied Copper Peptite Serum to cool the skin and keep it hydrated. I had no reaction luckily; besides avoiding the area when cleansing my skin later that evening, there was no massive post treatment maintenance. The following morning my skin was fine. I am a little red in the area naturally, but other than that there was no reaction or issue! One of my more visible veins looks darker, almost like its drying up and that should continue to improve over the next few weeks.
˚
Getting older is definitely getting tiresome! But I’m beginning to think, if these little things annoy me, why not just get them sorted if I can? I feel a little silly keeping these things to myself, covering up, instead of giving myself the time, the small amount of time needed to have them sorted out for good. These things can affect your confidence and in my case putting off making the appointment was silly. I’m feeling way better about the whole thing now, and thrilled with how it has turned out.
December 3, 2019/by Clear Skin
https://clearskin.ie/wp-content/uploads/2019/12/IMG_9789.jpg 1595 1936 Clear Skin https://clearskin.ie/wp-content/uploads/2021/11/newlogo-300x98.png Clear Skin2019-12-03 16:52:042020-05-16 18:03:04Sinead’s Red Veins get Tackled with KTP!